Researchers of the Michigan University state that, the combination of pepper and turmeric could save one from breast cancer.  Turmeric is very influential when it comes to the arena of Ayurveda, but when it is consumed orally, the absorbing capacity or the bioavailability is very poor.

This is because of the instant metabolism of curcumin in the intestine and liver.  But, when it is mixed with black pepper, the bioavailability of curcumin can be increased up to 200% and this combination can pave way to the cure of many cancers.

Why is Turmeric Important to the Human Body?

Turmeric comes with various medicinal properties.  These properties are termed as curcuminoids and the more prominent among them is curcumin, the most active ingredient.  It has the most powerful anti-inflammatory and antioxidant properties, but the ratio of curcumin present in turmeric is only 3%.

Related: Is Turmeric a necessity for Human Body? The Pros & Cons of Turmeric Usage

The research studies on turmeric, usually uses large amounts of curcumin with a dosage of 1 gram each day.  Thus to enjoy the fullest benefit of curcumin, the levels that you consume, turmeric as a spice is not enough. Short-term inflammation is beneficial to the human body or the pathogens will occupy the human body and kill it, curcumin helps the body with this regard.

Peppercorns have many health benefits.  They have their own influence in the holistic industry and has the ability to promote smooth digestion.  Dentists, use pepper corns as an antiseptic to cure decay of tooth and swellings of gums.  Peppercorn possesses a vital oil – piperine, which gives a strong spicy nature to the pepper.

Related: Why You Should Consider Black Pepper A Must Ingredient in your Diet

It also contains various hydrocarbons – limonene, pinene, mercene, terpenene and sabinene, which adds aroma to pepper.  These hydrocarbons increase the power of digestion by secreting the necessary enzymes for gastro-intestinal function.  Our body requires – potassium to control the blood pressure & rate of heart beat and Manganese for the production of blood cells.  They also have many essential vitamins like ‘A’ and ‘C’.  They also own various anti-oxidants that have the power to remove harmful properties from the body and prevent cancer or any disease.

What would be the benefits for combining both Turmeric and Black Pepper? Our body finds it very difficult to absorb the property curcumin into the bloodstream. 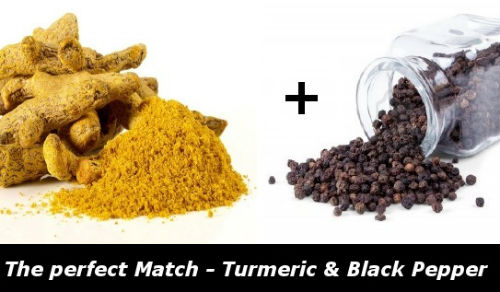 However, when it is taken in with black pepper, piperine enriches the curcumin absorption in the body by 200% and this combination work best in human body.

A study was conducted by the Researchers of Breast Cancer Research and Treatment on Mammosphere formation, in which the stem cells of breast were studied.  They published the findings of their research in their journal – that curcumin and piperine could get rid of the cancer cells.

The researchers examined the epithelial cells of a healthy breast, the normal stem cells and the progenitor cells. Piperine and curcumin dosage provided to them was 20 times stronger than one naturally consumes through food. Every stage of the treatment with these spices was observed. The two spices hindered the formation of Mammosphere. Moreover, they proved to be harmless, making sure that they were the possible anti-cancer agents. Even chemotherapies are ineffective to the cancer patients at times, and the cancer cells appear again.  Moreover, the study revealed that stem cells of the breast were self-renewed and the cancer causing cells were demolished.

The two active ingredients – curcumin and piperine, has the ability to stimulate more than 700 genes in the human body.  Moreover, they also have the ability to slow down the activity and production of cyclo-oxygenase-2 and lipo-oxygenase-5 and other enzymes that causes inflammation.  Thereby these spices, turmeric and black pepper can act as a pain relief agent.

Black Pepper has the proficiency to increase the metabolism and helps in the upsurge of calorie burning of the body.

It can also generate the sensation of fullness of stomach, without adding up extra calories in the body.

Turmeric and black pepper have natural compounds that can keep depression in control.  The compounds increase the level of serotonin and dopamine in the human brain and obstruct monoamine oxidase, the enzyme which is the main factor of causing depression in brain.

Turmeric and Black pepper are considered very safe for health, when taken in limited dosage.  Anything taken beyond the limits will cause health problems.  Pregnant and feeding mothers, diabetic patients and people with gall bladder problems should refrain from taking any type of herbal complements.  Though these both herbs play a prominent role in the holistic health industry, anyone who is already suffering from any kind of medical problems should stay away from taking these medical complements.  So, it always better to consult your practitioner, before taking in too much of any of these herbs.

Rudraksha – The “Eye Of Healing”